When I was asked if I would like to collaborate on a post about asking Children Twenty Questions I happily said yes. One of the things I really loved whilst studying Psychology was the Twenty Statements Test – basically what you think about yourself can reveal a lot about your personality and how you feel about yourself (Kuhn, 1960). The Test helps to discover about where people feel they belong in society, their beliefs, interest and ambitions and how they feel about themselves. As these beliefs are developed from childhood I think it is a good idea to get to know what our children are thinking, and help maybe encourage those beliefs about themselves to be positive. Of course asking our children twenty questions can also just be fun and repeated year by year to see how they are changing and developing.

To make it even easier Shepherd’s Friendly have a worksheet 20 Questions to Ask your Children that you can download and print off. This not only makes it easier, but it is more child-friendly with illustrations and means that you can get them to fill it in year after year. 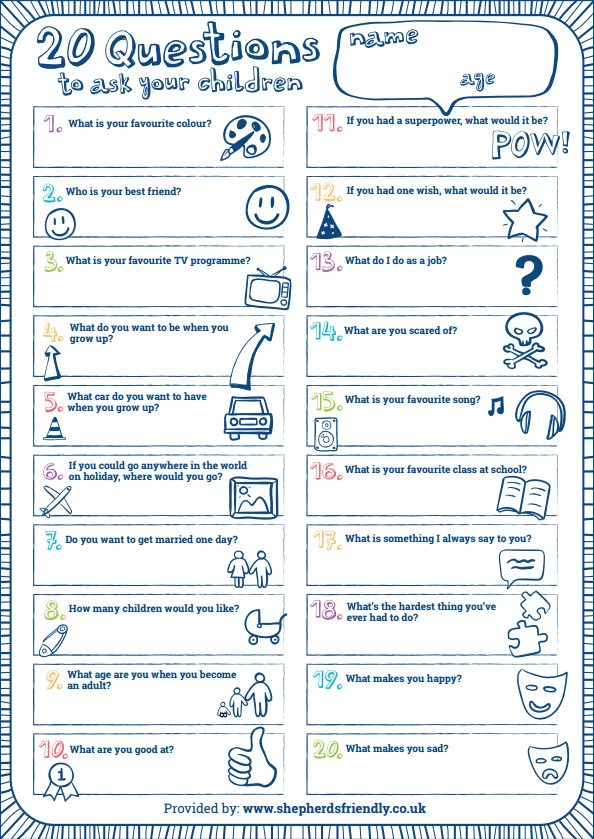 I asked our youngest son the questions and actually it really highlighted to me how far he has come with his development as I am sure even a year ago he would not even have understood the questions never mind being able to give an appropriate response.

Q1. What is your favourite colour?
Blue – and I think he thought I was crazy for asking this because as he pointed out – I already know this!
Q2. Who is your best friend?
He didn’t really want to talk about this and just said no-one. I even tried to suggest his older brother but he was adamant that no-one likes him. I wrote about this recently called Alone at Playtime.
Q3. What is your favourite TV programme?
He found this hard as there’s so many to choose from. In fact we came back to it, and only answered it after he had put something on the television to watch – which then became his answer. This happened to be Ultimate Spiderman.

Q4. What do you want to be when you grow up?
Currently it is Art Week at school and they have been learning about Pablo Picasso. Due to this my son has decided that he wants to be an artist and move to France – because that, apparently, is where all artists live!
Q5. What car do you want to have when you grow up?
I don’t think he really knows many makes of car and originally said “square” – which is how the one of the paper looks. He changed it to a two seater but has told me he’d like a 66-plate before (which is completely possible being as he is 7 years old, and therefore 66-plates will be at least 10 years old when he can drive).
Q6. If you could go anywhere in the world on holiday, where would you go?
Again very much living in the moment his answer was Italy because I have literally just booked to go. It will be his first time in an aeroplane and so I like the fact that there was a plane illustration next to the question.
Q7. Do you want to get married one day?
At first he just said no but when talking about question eight it became apparent that not that he didn’t want to but rather he had no-one who loved him to marry.
Q8. How many children would you like?
Following on from question seven he said he wouldn’t have children because he wasn’t getting married. I am pleased that he believes that he should be married before having children – it isn’t so much the marriage bit but the commitment. His actual words were I do want a baby but no-one loves me. Again that babies are made out of love. I reassured him that he was only 7 and plenty of time to find the right person.
Q9. What age are you when you become an adult?
Straight away he said 18 – this is probably due to having an older brother. But he did then doubt himself and wondered if it were sixteen. I know I thought I was an adult at sixteen lol!
Q10. What are you good at?
At first he said nothing but I am glad to say that he told me to cross that out. He had had swimming the day before and so said breast stroke. It is good to see how good after school clubs are for his confidence.
Q11. If you had a superpower, what would it be?
We watch a lot of Harry Potter (with the invisibility cloak) and so I was not surprised that he wanted his superpower to be invisibility – and then he could kiss people! What happened to the marriage commitment first lol!

Q12. If you had one wish, what would it be?
His older brother got an iPod Touch for Christmas and now he really wants one too – so this was his wish.
Q13. What do I do as a job?
Apparently I do nothing apart from cleaning the bedrooms. Gosh I hope no-one looks at the bedrooms because if that’s all I do I don’t do a very good job!
Q14. What are you scared of?
He said the dark but he isn’t. And he is actually scared of spiders – well he makes me take them outside anyway!
Q15. What is your favourite song?
He said, “What’s that one that goes, heeey, sexy lady?” That would be Gangman Style then.
Q16. What is your favourite class at school?
Nothing. He wouldn’t even consider it being Art.
Q17. What is something I always say to you?
He didn’t quite get this and so I gave him lots of examples. He picked – Eat all your vegetables.
Q18. What is the hardest thing you’ve ever had to do?
Again living in the moment he originally said eating a tomato. He had tried it the night before and ended up spitting it back out. We didn’t care it was such a big deal for him to even put it in his mouth! But he changed his answer to paint a face with cardboard, paint and a pencil – again something from Art Week this current week at school.
Q19. What makes you happy?
He couldn’t think of anything and this made me feel sad. So I reminded him how happy he felt when he heard he was going to Italy.

Q20. What makes you sad?
Following on from question 19 was when his dad said that unless he tried to eat his dinner he wouldn’t be going to Italy – which I think was very mean!

In conclusion I found this to be really useful. I often find it a struggle to get out of him how he feels but it is clear from this that he is developing a positive sense of self – with ambition and interests. Now to work on a bit more self-belief and how he views relationships with others. I think it would be good to try these questions with all my boys and see how their answers vary. Why not download it for yourself and let me know the results. Or use #ShepherdsTwenty to see what other hilarious, enlightening and heart melting answers other children came up with.

This is a commissioned post, the activity produced by Shepherds Friendly Society who offer a range of savings plans including a Junior ISA.

Family Skiing thanks to Spogo at Snozone
Saturday is Sad Caption Day
Is it Safe for a Child to have a Mobile at School?

« How breastfeeding made me a lazy parent » What Children Get Up to Online?